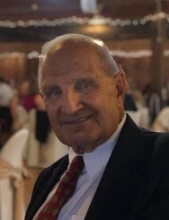 Nicholas Stincic, age 80, passed away on February 18, 2021 surrounded by his loving family. Nick was born on Christmas Day 1940 in Cleveland, Ohio to Nicholas and Josephine (Ragets) Stincic. He attended Collinwood High School, worked on the docks in Cleveland and was a proud member of Laborers Union #436 at Perry Nuclear Power Plant. He was a talented entrepreneur and established his own Business Stincic Painting for 50 plus years. He retired from University Hospitals Systems as a painter.

His greatest joy in life was spending time with them and telling them stories of the old neighborhood. He spent most days making his rounds and checking in on his family and friends. He loved bird watching, working in his beautiful yard and gifting his glass Angels to anyone in need. Nick loved watching the Cleveland Cavs and more than anything he loved attending all of his grandchildren’s sporting events. He was the most Generous Father, Friend and Neighbor that anyone would be lucky enough to meet. His greatest gift was the time he gave to his loving family.

Memorial services will be held at a later date. Behm Family Funeral Home of Madison is assisting the family. Online obituary and condolences may be viewed at www.behmfuneral.com

To leave a condolence, you can first sign into Facebook or fill out the below form with your name and email. [fbl_login_button redirect="https://behmfuneral.com/obituary/nicholas-stincic/?modal=light-candle" hide_if_logged="" size="medium" type="login_with" show_face="true"]
×