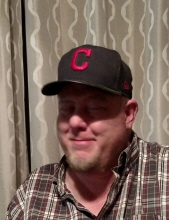 John worked as a contractor doing wallpapering and drywall work, and later, worked for Avery Dennison. He enjoyed following the Cleveland Indians and Browns, fishing and hunting.

Friends will be received 9 a.m. to 11 a.m. Saturday, November 2, 2019 at the Behm Family Funeral Home, 175 South Broadway, Geneva, OH with a service immediately following at 11 a.m. at the Funeral home. The service will be officiated by his uncle, Earl Morgan. Final resting place will be Madison Memorial Cemetery. Online obituary and condolences may be viewed at www.behmfuneral.com

To leave a condolence, you can first sign into Facebook or fill out the below form with your name and email. [fbl_login_button redirect="https://behmfuneral.com/obituary/john-m-morgan/?modal=light-candle" hide_if_logged="" size="medium" type="login_with" show_face="true"]
×