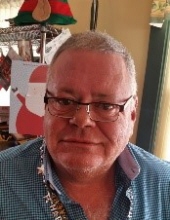 Jeff was the owner of Penguin Mechanical, Inc. for over 47 years and had a very well respected and successful business in the Madison and Northeast Ohio community. His father Williard started the family business in 1956 and Jeff took over the business in 1974, when he officially became Mr. Penguin. Jeff was well known in the community. He started and directed the Madison Community Funeral Team. Over that time, Jeff and the squad performed almost 1200 military funeral honors. Jeff was also the Post Commander of the Sons of the American Legion Jay Wilson Post 112, as well as a lifetime member there and the American Legion Post 601. Mr. Penguin was also a member of the Willoughby Masonic Lodge. He graduated Willoughby South High is 1974 and attended college.

He is survived by his wife of 18 years, Kathy “Boo Boo Kitty” Lynn; brothers, Richard (Debbie) Lynn, David (Debbie) Lynn of Texas, Willard (Carolyn) Lynn of California.
He was preceded in death by his parents; and his sisters, Nancy and Patty Lynn.

It was Mr. Penguin’s wish for no services—just for people to smile and raise a glass in his honor.

To leave a condolence, you can first sign into Facebook or fill out the below form with your name and email. [fbl_login_button redirect="https://behmfuneral.com/obituary/jeffrey-e-lynn/?modal=light-candle" hide_if_logged="" size="medium" type="login_with" show_face="true"]
×