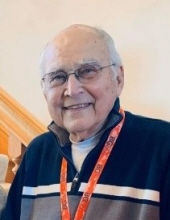 Fred was a 1950 graduate of Geneva High school and a 1954 graduate of Bowling Green State University where he was the university’s Cheerleading mascot “Freddie Falcon”. He also served as an officer in the Army Airborne Ancillary with the 11th and 101st Airborne Division. There he implemented the first youth activities position for an Army Post, supervising the education and extracurricular activities of young adults.

Fred was involved in many community groups including the Kiwanis, the boy Scouts and was a member of the Episcopal Church serving in many positions there. He also served on the Ashtabula County Board of Health and in many other capacities in the area including the American Red Cross, and the GHS Class reunions.

To leave a condolence, you can first sign into Facebook or fill out the below form with your name and email. [fbl_login_button redirect="https://behmfuneral.com/obituary/fred-r-frisbie/?modal=light-candle" hide_if_logged="" size="medium" type="login_with" show_face="true"]
×