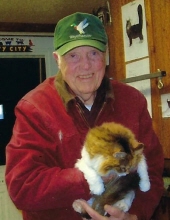 Eylieff William “Bill” Hansen, age 91, left us for his heavenly home on February 17, 2020. He was born February 3, 1929 in New Orleans, Louisiana to Juline (Granger) & Eylieff W. Hansen, Sr. He graduated from Mayville High school in Mayville NY and received his bachelor’s degree from Parks Aeronautical School, St. Louis, Missouri. He married Elizabeth Waterman on June 15, 1951 and after serving in the United States Airforce, they made their home in Northeastern Ohio.

Bill retired from Lubrizol in Wickliffe, OH but continued many lifelong friendships. He was involved with the Methodist Church, drove for Meals on Wheels and also served as president of the local chapter of Habitat for Humanity. His desire to help others led to his recognition by the Governor of Ohio for all his volunteer work. Bill also enjoyed the outdoors, was an expert model builder and canoeist.

Friends will be received 10 am to 11 am Tuesday, February, 25, 2020 at the Behm Family Funeral Home, 26 River Street, Madison, OH. Funeral Service will be immediately following at 11 am at the funeral home. Final resting place will be Fairview Memorial Park in Madison. Contributions may be made in Bill’s name to The Memorial & Honor Program of St. Jude Children’s Research Hospital, P O Box 1000, Dept. 300, Memphis, TN 38148.

To leave a condolence, you can first sign into Facebook or fill out the below form with your name and email. [fbl_login_button redirect="https://behmfuneral.com/obituary/eylieff-bill-hansen/?modal=light-candle" hide_if_logged="" size="medium" type="login_with" show_face="true"]
×