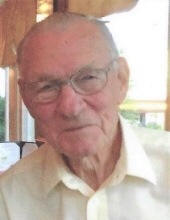 Earl Seese, age 88 of North Perry, passed away Monday, February, 4, 2019 at home. He was born to Florence (Parker) and Hughie “Pete” Seese on August 24, 1930 in Alvy, West Virginia. On September 14, 1951, Earl married the love-of-his-life, Betty Wright, and together they started a family and a journey that would endure for 67 years.

Earl worked for 25 years at Diamond Shamrock and retired from Perry Local Schools as a custodian after 13 years in 1990. He was a faithful member of First Baptist Church. Also, he enjoyed hunting, fishing and trapping. With a sense of adventure, he rode his bike all over North Perry. Most of all, he treasured his family.

In lieu of flowers, contributions may be made to The First Baptist Church in Perry.

The Behm Family Funeral Home, 26 River Street in Madison, is assisting the family. Online obituary and condolences may be viewed at www.behmfuneral.com

To leave a condolence, you can first sign into Facebook or fill out the below form with your name and email. [fbl_login_button redirect="https://behmfuneral.com/obituary/earl-seese/?modal=light-candle" hide_if_logged="" size="medium" type="login_with" show_face="true"]
×