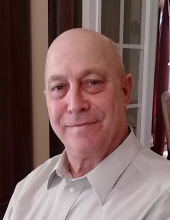 Donald A. Schley, age 70 of Madison, departed this life peacefully on February 17, 2021. Born in Cleveland on January 11, 1951, he was a son of the late Arthur and Erma (Hoover) Schley. He leaves behind his loving wife of 20 years, Rachel (Zinkowich) Schley.

Don was a 1969 graduate of Ledgemont High School and worked as an insurance agent for State Farm for 45 years. He was a committed follower of Jesus Christ, and a member of New Day Christian Church where he served as an elder.

He was preceded in death by his first wife, Bonita (Buzzi) in 1999, to whom he was married 28 years; his parents; his siblings, James, Joanie and Barbara; and most recently his brother Ken in 2021.

To leave a condolence, you can first sign into Facebook or fill out the below form with your name and email. [fbl_login_button redirect="https://behmfuneral.com/obituary/donald-a-schley/?modal=light-candle" hide_if_logged="" size="medium" type="login_with" show_face="true"]
×