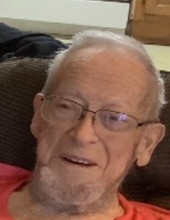 Clarence E. Ashburn, age 91, of Roaming Shores passed away July 5, 2021 at UH Medical Center in Cleveland. Clarence spent his 91 years enjoying life. There wasn’t a joke told that he hadn’t heard, and loved sharing a joke or story when the opportunity presented itself. He loved being a Boy Scout leader, camping, fishing, hunting, feeding the birds and writing poetry and children’s stories. His artistic ability gave him a lifetime of enjoyment. He loved painting and in his later years, he painted crosses on small pieces of leather, which he freely gave to any smiling face.

Clarence married his sweetheart neighbor Dorethea “Deets” Lawrence and together they raised four boys, Rodger, Bruce, Rick and Brad. Clarence and Deets were married 50 years until her passing in 2002. Clarence found love again and married Ann (Freed) on March 8, 2003. They enjoyed traveling which included cruises and a trip to Hawaii.

Friends and family will be received from 5-8 pm on Monday, July 12, 2021 at Behm Family Funeral Home, 26 River Street in Madison. Funeral Service will take place at 11 am on Tuesday, July 13, 2021 at the funeral home. Final Resting place will be at Perry Cemetery. Online obituary and condolences may be viewed at www.behmfuneral.com

To leave a condolence, you can first sign into Facebook or fill out the below form with your name and email. [fbl_login_button redirect="https://behmfuneral.com/obituary/clarence-e-ashburn/?modal=light-candle" hide_if_logged="" size="medium" type="login_with" show_face="true"]
×