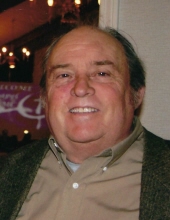 William served in the U.S. Navy serving in Vietnam. He retired in 2008 from S.C. Fastening Systems in Macedonia. He was a member of the VFW Post 8548, past District 7 Commander and Military Order of the Cooties, serving as past grand commander. He also was an active member of other military veterans groups. He enjoyed vegetable gardening, baking and cooking and was a member of Chapel United Methodist Church.

Friends will be received Thursday, October 31, 2019, 4-8 p.m. at the Behm Family Funeral Home, 26 River St., Madison, OH. Funeral Service will be held on Friday, November 1, 2019 at 11 a.m. at Chapel United Methodist Church, 2019 Hubbard Road, Madison, OH with 1 hour of visitation prior to the service. Final Resting Place will be Ohio Western Reserve Cemetery, Rittman, OH. In lieu of flowers, contributions may be made to Chapel United Methodist Church or VFW Post 8548 Building Fund, Madison, OH.

To leave a condolence, you can first sign into Facebook or fill out the below form with your name and email. [fbl_login_button redirect="https://behmfuneral.com/obituary/william-h-uehlinger-jr/?modal=light-candle" hide_if_logged="" size="medium" type="login_with" show_face="true"]
×