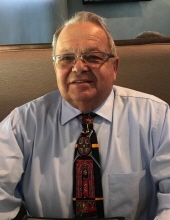 Bill served in the U.S. Marine Corps from 1959 to 1963. He worked as a machinist/boiler operator for Lubrizol, retiring in 2003. Bill was the owner/operator of Hoffman Millwork & Builders Services. He attended Immaculate Conception Church and made custom woodwork designs for them. He belonged to the Knights of Columbus. Bill enjoyed traveling with his wife, Pat, to Australia, Hawaii, Italy and by cruise to Alaska.

Friends will be received 3-7 P.M., Friday, September 18, 2020 at Behm Family Funeral Home, 26 River St., Madison. Mass of Christian burial will be held 11 A.M. Saturday September 19, 2020 at Assumption Church in Geneva with Fr. Daniel Finnerty officiating. Final resting Place will be North Madison Cemetery, Madison, OH with a Veterans Service. Contributions may be made in Bill’s name to Hospice of the Western Reserve, PO Box 72101, Cleveland, OH 44192.

Guests are required to follow current pandemic guidelines, wear masks and practice social distancing. Behm Family Funeral Home of Madison is assisting the family. Online obituary and condolences may be viewed at www.behmfuneral.com

To leave a condolence, you can first sign into Facebook or fill out the below form with your name and email. [fbl_login_button redirect="https://behmfuneral.com/obituary/william-earl-hoffman/?modal=light-candle" hide_if_logged="" size="medium" type="login_with" show_face="true"]
×