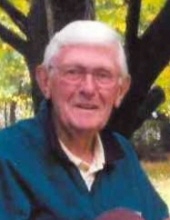 William E. Rabe, age 94, passed away Monday, August 30, 2021 at Geneva Village Retirement. He was born January 11, 1927 in Women’s Hospital in Cleveland the son of Cecilie (Wegener) and William Ernest Rabe. He was a resident of Euclid, Ohio before moving to Madison in 1959.

He was a Veteran of World War II, serving in the U.S. Army on Leyte, Luzon, Mindoro, The Philippines, and with the 8th Air Force on Okinawa, Japan.

He especially enjoyed the music of the 1920’s, 30’s and 40’s, and played the violin, viola, tympani and the ukulele, and never resisted the temptation of singing with a band or piano player.

He was an active member of the Madison Country Club since 1960, serving two six-year terms as a Board Member. He enjoyed golfing, hunting, fishing, bowling, horseshoes, photography with his own darkroom, learned to use a computer, and collected 78 rpm records as a hobby.

He worked for the Radebaugh-Fetzer Co., a Medical/Surgical Supply Co., where he became dedicated to the health field. Served as the first CEO of Northeastern Ohio General Hospital in Madison from 1959-1965. He was a member of Rotary International, Elks, and American Legion.

His career in long-term care began in 1965 at the Jewish Convalescent and Rehabilitation Center. He retired in 1992 but returned to the workforce in 2006 where he was remembered fondly as a Walmart Greeter, playing the Ukulele and Viola for countless customers.

Friends and family will be received 10 am to 12 noon, Saturday, September 4, 2021 at Behm Family Funeral Home, 26 River Street in Madison. Military Honors will be presented at 12 Noon by the Madison Community Funeral Honors Team. In lieu of flowers, contributions may be made to Hospice of the W.R. 1166 Lake Ave. Ashtabula, Ohio 44004.

To leave a condolence, you can first sign into Facebook or fill out the below form with your name and email. [fbl_login_button redirect="https://behmfuneral.com/obituary/william-e-rabe/?obId=22191633?modal=light-candle" hide_if_logged="" size="medium" type="login_with" show_face="true"]
×