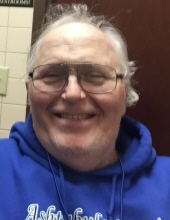 William “Bill” Oros age 67, former long time resident of Euclid and recent resident of Saybrook Township, passed away at home surrounded by family on Thursday, February 14, 2019. He was born May 7, 1951 in Uniontown, PA the son of Michael J. and Anna M. Oros. Bill married his true Valentine, Janice Marie Hocevar on December 18, 1976 in Euclid, Ohio.

Bill was a 1969 graduate of Maple Heights High School and earned a Bachelor’s Degree in History at Cleveland State University. He worked in the grocery industry as a retail clerk.

Bill was a long time parishioner of Ss’ Robert & William Parish in Euclid. He was a current member of Our Lady of Peace Parish in Ashtabula. Bill was a history buff all his life and enjoyed watching the History Channel. His favorite treat was donuts. Bill was an avid bird watcher, but especially had a love for cats. He fancied himself a true “American Picker,” and was indeed a master of trivia.

He was preceded in death by his parents; sisters-in-law, Maria and Sandy (Mark) and brother-in-law, Chuck.

Friends will be received from 6-8 p.m. on Tuesday, February 19, 2019 at The Behm Family Funeral Home, 175 S Broadway, Geneva, Ohio. A Mass of Christian Burial will be held at 10 a.m. on Wednesday, February 20, 2019, at St. Joseph Catholic Church – Our Lady of Peace Parish, 3312 Lake Avenue, Ashtabula, Ohio 44004. Final resting place will be at Harpersfield Cemetery.
Online obituary and guest book at www.behmfuneral.com
.

To leave a condolence, you can first sign into Facebook or fill out the below form with your name and email. [fbl_login_button redirect="https://behmfuneral.com/obituary/william-bill-oros/?modal=light-candle" hide_if_logged="" size="medium" type="login_with" show_face="true"]
×