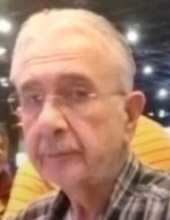 Bill was a proud veteran having served the Army Reserves from 1965 to 1971. He was retired after 30 years with the UFCW Local 880. Bill was a member of Immaculate Conception Church in Madison. In his free time he enjoyed sports on TV. He enjoyed visiting casinos and was a fan of the lottery. He and Sue occasionally liked to travel but he truly enjoyed spending time at home and cooking for Sue. His greatest passion were his grandkids and being chief babysitter.

He was preceded in death by his daughter, Karyn in 2014; parents; 5 siblings, Genevieve, Andrew, John, Marge and Esther.

Mass of Christian Burial will be 11 am Monday, May 17, 2021 at Immaculate Conception Church, 2846 Hubbard Road in Madison. Guests are required to follow current pandemic guidelines.

To leave a condolence, you can first sign into Facebook or fill out the below form with your name and email. [fbl_login_button redirect="https://behmfuneral.com/obituary/william-bill-m-usko/?modal=light-candle" hide_if_logged="" size="medium" type="login_with" show_face="true"]
×