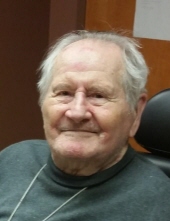 Wayne L. Etzel, formerly of Seneca, Pa., passed away peacefully on Monday, March 15, 2021. Born on April 9, 1924, he was the son of William J. Etzel and Rebecca C. Piper Etzel. He was a graduate of Cranberry High School and served in the Army during World War II in the Pacific Theater with the 41st Infantry Division, earning the Bronze Star.

On November 28, 1947 – 73 years ago – he married the former Bernadette J. Lander, who survives. He is also survived by four children, Linda Fye of Palm Harbor, FL; Ron Etzel of Beltsville, MD; Tom Etzel (Alicia) of Mentor, OH; and Annette (Kevin) Bailey of Ankeny, IA; along with 7 grandchildren; 11 great-grandchildren and 1 great-great grandchild.

Wayne retired in 1986 from the Pennsylvania Department of Transportation after 31 years of service. Wayne loved playing cards and games with the grandchildren and building puzzles.
He was preceded in death by his parents; and siblings Earl Etzel, Gertrude Etzel Meanor, Dorothy Etzel Bemis and Fay Etzel, who died in infancy.

In lieu of flowers, donations can be made to Venango Catholic High School, Oil City, PA.

To leave a condolence, you can first sign into Facebook or fill out the below form with your name and email. [fbl_login_button redirect="https://behmfuneral.com/obituary/wayne-l-etzel/?modal=light-candle" hide_if_logged="" size="medium" type="login_with" show_face="true"]
×