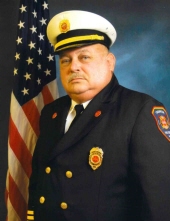 Thomas E. Dewey, age 73, of Thompson, passed away Sunday, June 21, 2020 at Burton Health Care. He was born November 10, 1946 in Painesville to Robert W. and Bessie (Wilson) Dewey. Tom attended Thompson High School, was on both the Football and Basketball Teams and was voted most athletic in his class. He enlisted in the United States Marine Corps without his parents’ permission at the age of 17. He served in Vietnam and was later released early for state side police duty where he worked for the Thompson Police Department. He married Mary Vandevander on October 2, 1993 in Chardon, OH.

Tom held many titles thru his career and was the recipient of many awards and recognitions. He was a member of many associations including, Buckeye State Sheriffs Association, Fire Chiefs Association, Ground Pounders and Buckeye Pullers, VFW, American Legion and the Geauga County Fire Investigation Unit.

In his spare time he enjoyed traveling, spending time at his camper, attending tractor pulls and boating but most of all he enjoyed time spent with family.

Private Family Services will be observed. Final resting place will be at Maple Grove Cemetery in Thompson. Contributions may be made in Tom’s name to The Thompson Fire Department, PO Box 204, Thompson, OH 44086.

To leave a condolence, you can first sign into Facebook or fill out the below form with your name and email. [fbl_login_button redirect="https://behmfuneral.com/obituary/thomas-e-dewey/?modal=light-candle" hide_if_logged="" size="medium" type="login_with" show_face="true"]
×