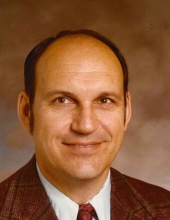 Thomas B. Houston passed from this life on May 3, 2020. He was born in Bangor, Maine and spent his young life there. He also lived in Hawaii and Rhode Island before moving to Mentor at age 8. He graduated from Mentor High School in 1951 and also graduated from Western Reserve University in 1955 with a Bachelors Degree in Geology. While at college he was an Air Force ROTC member and was commissioned a Second Lieutenant upon graduation. Tom spent three years serving as weapons controller in Alaska and Iowa as part of the Air Defense Command.

Tom attended the University of Cincinnati after being honorably discharged, then began a 34 year career teaching Earth Science for the Mentor Schools, mostly at Ridge Junior High School. During the summer, he worked construction and as a geologist in Wyoming, Texas and Alaska for Diamond Shamrock. Later, he and his family traveled with a tent camper throughout the U.S., touring the National Parks.

Tom was a volunteer gymnastics coach for the Painesville YMCA. He also led hikes through Penitentiary Glenn for the Lake Metro Parks and through Stebbins Gulch for Holden Arboretum.

Tom’s education continued by getting a Master’s degree in education at John Carroll University and many more graduate courses at Kent State University. He was also a long time member of the First Church of Christ in Painesville. He served as Elder, Church Board Chairman and teacher of the Volunteer class. He also helped with the North Madison Church of Christ teaching and with the missions program.

During his retirement he taught Physical Science at Lakeland Community College. He added to his volunteering by working in the paleo botany department at the Museum of Natural History in Cleveland. He also enjoyed sailing his catamaran on Lake Erie, fossil hunting and traveling extensively with his wife, including going to Cleveland Indians Spring Training.

A private service will be held at Perry Cemetery conducted by Dr. Trevor Littleton. Behm Family Funeral Home of Madison, OH is assisting the family. Contributions or memorial gifts may be sent to First Church of Christ, 422 Mentor Avenue, Painesville, OH 44077 or to Hospice of the Western Reserve, PO Box 72101, Cleveland, Ohio 44192.

Mikaela and Peter Bolek and family

To leave a condolence, you can first sign into Facebook or fill out the below form with your name and email. [fbl_login_button redirect="https://behmfuneral.com/obituary/thomas-b-houston/?modal=light-candle" hide_if_logged="" size="medium" type="login_with" show_face="true"]
×