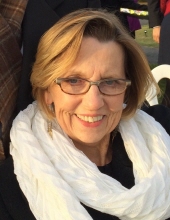 Terry was born in Buffalo, New York, and was a graduate of Kenmore West High School and Rosary Hill College in Buffalo. A few years after meeting on a blind date, Terry married Rob in Severna Park, MD. The couple soon moved to Geneva, Ohio to raise a family and pursue their careers. A devoted mother of three, Terry encouraged her children to follow their own paths even when they diverged from her own. Though each of her kids claimed to be her favorite, she never faltered from insisting she loved them all equally, further solidifying her place in their minds as Best Mom Ever.

Terry loved her work as a registered Medical Technologist. She was well-respected at University Hospital Geneva where she was employed for over 25 years and left there with many lifelong friends. She and Rob retired to Las Cruces, New Mexico in 2013 in search of warmer winters and they returned to Ohio every summer to enjoy their beloved family cottage on Lake Erie.

Her Catholic faith was integral to who Terry was and she was an active member of Assumption Church in Geneva where she served as a Eucharistic minister and member of the St Vincent de Paul Society. She also led a bereavement group and served on the Board of Directors of Ashtabula County Catholic Charities. After moving to New Mexico, she quickly settled in as a member of St. Albert the Great Newman Parish in Las Cruces.

While content on her own, Terry will be remembered as someone who flourished when she was with other people. Her social calendar was full as a member of the Geneva Women’s Club, Modern Literary Society and P.E.O. International. She was an avid swimmer at the YMCA, a trail hiker in the hills of Las Cruces and part of more than a few sewing and knitting circles over the years. She was happy to tell anyone that she was 40 years sober and even happier when that sobriety ended two months prior to her passing when she once again could enjoy her favorite cocktail, the Manhattan.

A funeral mass will be held at Assumption Church, Geneva, 11 a.m. Wednesday, November 4, 2020. Burial will follow at Edgewood Cemetery in Ashtabula. Guests are required to follow current pandemic guidelines, wear masks and practice social distancing. The family hopes a party in celebration of Terry’s life will be possible in the summer of 2021.
In lieu of flowers, memorial donations may be made to Hospice of the Western Reserve PO Box 72101, Cleveland, Ohio 44192 or P.E.O. International.

Behm Family Funeral Home of Geneva is assisting the family. Online obituary and condolences may be viewed at www.behmfuneral.com

To leave a condolence, you can first sign into Facebook or fill out the below form with your name and email. [fbl_login_button redirect="https://behmfuneral.com/obituary/theresa-sheldon/?modal=light-candle" hide_if_logged="" size="medium" type="login_with" show_face="true"]
×