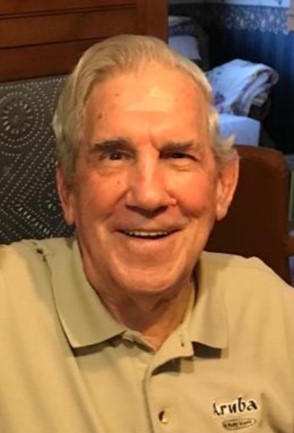 Ted spent 30 years as a news photographer for Channel 5 in Cleveland.  During that time, Ted was able to capture history as it unfolded, locally, nationally, and internationally.  Raised in Cleveland, he loved the action and fast pace of the city.  The news was exciting and alive, and he became a part of it.  He knew everyone, and he had a story for every occasion.

Another one of Ted’s passions was judo, and he was proud of the years he spent teaching it at the Cleveland Police Academy, which led him to be chosen as an alternate juror in the judo competition at the 1964 Tokyo Olympics.

His later years were spent in Ashtabula County where he became involved in his community as a Township Trustee.  He also devoted countless hours to his Ruritan Club and Leadership Ashtabula County.  During this time, he slowly compiled his memoirs, and at age 84, fulfilled the dream of publishing his life story, Capturing the Moment: Forty Years as a Cleveland Photojournalist.

Preceded in death by his parents and grandson Thomas Oldani.

Family and friends will be received on Friday, March 11, 2022 from 5:00-8:00pm at the Behm Family Funeral Home, 26 River Street in Madison, Ohio.  A Mass of Christian Burial will be held at 10:30am on Saturday, March 12, 2022 at Sacred Heart Catholic Church, 3049 State Route 45 in Rock Creek, Ohio.  Everyone is welcome to stay for a luncheon at church after Mass, which will be followed by a funeral procession to All Souls Cemetery in Chardon.  Online obituary and guest book may be viewed at www.behmfuneral.com

To leave a condolence, you can first sign into Facebook or fill out the below form with your name and email. [fbl_login_button redirect="https://behmfuneral.com/obituary/theodore-vincent-ocepek/?modal=light-candle" hide_if_logged="" size="medium" type="login_with" show_face="true"]
×