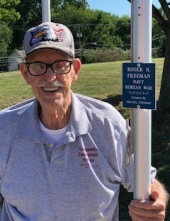 Roger Freeman, age 88, of Madison, passed away Wednesday, May 13, 2020 peacefully surrounded by his loving children. He was born February 13, 1932 the son of Bessie Mabel (Peck) and Chester Neal Freeman.

Roger first and foremost was a born again believer in Jesus Christ. Roger felt truly honored to serve his country in the United States Navy. He was a member of American Legion Jay Wilson Post 112 in Madison. Roger worked as an electrician for Comstock and was proud to be a member of Local 673 Electrical Union. He was also a member of the Holy Cross Lutheran Church in Madison. He enjoyed working outdoors and gardening. He was a fan of Nascar and enjoyed stock car racing. Most of all, Roger loved spending time with his family, who were truly devoted to him.

He was preceded in death by his first wife Rebecca, second wife, Marie, and his parents.

Private graveside services were held at Madison Memorial Cemetery with Pastor James Porostosky of Lakeshore Assembly of God in Mentor officiating. “Behold, I stand at the door and knock, if any man hears my voice and opens the door, I will come in and dine with him and he with me.” Rev. 3:20.

To leave a condolence, you can first sign into Facebook or fill out the below form with your name and email. [fbl_login_button redirect="https://behmfuneral.com/obituary/roger-freeman/?modal=light-candle" hide_if_logged="" size="medium" type="login_with" show_face="true"]
×