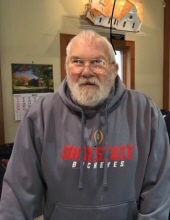 Robert Martin Frey, age 90, of Perry, Ohio, passed away Monday, December 14,2020 at The Lantern of Madison. He was born July 14,1930 to Orville and Persis Frey. He married Corrinne Richardson on November 22, 1951.
Bob was a 1948 graduate of Perry High School and served in the U.S Army From 1950-1952 as a radar technician. Prior to serving in the military he was a farm tractor mechanic and later worked as a truck diesel mechanic for Ohio Rubber and a sales rep for Napa Auto Parts. Bob enjoyed going to flea markets with Corrinne, fishing,” hobby” gardening, collecting John Deere tractors, steam engines and trains. He was also an avid Cleveland Indians, Browns and Ohio State fan.
He is survived by his sons; Robert (Virginia) Frey, Donald (Judy) Frey, Daniel (Diane) Frey; Son -in- law Christopher Palmer, eight grandchildren; 1 great granddaughter; and brother; Richard Frey. He was proceeded in death by his wife; Corrinne, daughter; Barbara Palmer, his parents; and sister; Persis Ann Hill.
A memorial service will be held at a later date. Final Resting Place will be Perry Cemetery. Contributions can be made to Hospice of Western Reserve.

To leave a condolence, you can first sign into Facebook or fill out the below form with your name and email. [fbl_login_button redirect="https://behmfuneral.com/obituary/robert-martin-frey/?modal=light-candle" hide_if_logged="" size="medium" type="login_with" show_face="true"]
×