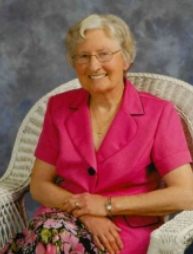 Norma J. Starkey, age 95 of Thompson, passed away peacefully with her family by her side on Friday, December 3, 2021 at UH Geauga Medical Center in Chardon. Born on April 17, 1926 in Painesville, she was the daughter of the late Iva Grace (Behm) & Lewis Chaffe. She married William Starkey on July 1, 1950. She was a 1944 graduate of Thompson High School and attended college at Baldwin Wallace.

Norma was a lifelong Thompson resident and member of Thompson United Methodist Church where she was the volunteer organist for over fifty years, retiring on December 24, 2016 at the age of 90. She Enjoyed sewing, cooking, gardening and traveling. She was a loyal and devoted supporter of Ledgemont Schools making scrubbies as a fundraiser for many years. She was also a Former accounting clerk at UniRoyal where she met Bill and was also a teller at Huntington Bank.

Most of all Norma loved spending time with her family. Following the loss of her husband, Bill, she continued to travel to Florida with her family. She always hated to see each family leave. She was also an advocate for her grandchildren and even her great grandchildren’s activities as she attended many sporting events, concerts, graduations, and horse shows. She also loved the Great Geauga County Fair. She was always on the go with a big smile on her face.

Friends will be received from 6:00 to 9:00pm on Friday, December 10, 2021 at The Behm Family Funeral Home, 26 River Street in Madison. Funeral Service will be held at 11:00am on Saturday, December 11, 2021 at Thompson United Methodist Church, 6758 Madison Road, Thompson. Burial will take place at Maple Grove Cemetery in Thompson, Ohio. In lieu of flowers, donations may be made to the Thompson United Methodist Church or the Hospice of the Western Reserve in Norma’s name. Online obituary and guestbook at www.behmfuneral.com

To leave a condolence, you can first sign into Facebook or fill out the below form with your name and email. [fbl_login_button redirect="https://behmfuneral.com/obituary/norma-j-starkey/?modal=light-candle" hide_if_logged="" size="medium" type="login_with" show_face="true"]
×