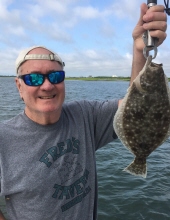 Michael loved his family first and foremost. His gifts and talents were many, most notably his wonderful and unique sense of humor. He was very proud of his roots in Conshohocken and Blue Bell PA. Since childhood, he loved spending summer vacations with his family at the NJ Shore. He was fiercely loyal to the Fighting Irish.

He leaves behind his wife, Lynn; daughter Kimberly Jonas; sons, Michael (Kim) Clark and Christopher (Erin) Clark; grandchildren, Mikey, Abby, Christopher, Samuel and Caroline. He also leaves behind many nephews and nieces. He is survived by his brother J. Donald Clark Jr. and was preceded in death by his parents; and his sisters Muriel, Nancy and Patricia.

No Service is being planned at this time. Behm Family Funeral Home of Geneva is assisting the family. Online obituary and condolences may be viewed at www.behmfuneral.com

To leave a condolence, you can first sign into Facebook or fill out the below form with your name and email. [fbl_login_button redirect="https://behmfuneral.com/obituary/michael-j-clark/?modal=light-candle" hide_if_logged="" size="medium" type="login_with" show_face="true"]
×