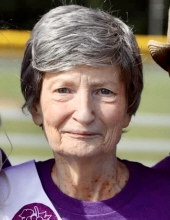 Mary Kay Gersin, age 79, of Geneva, passed away Friday, October 1, 2021 surrounded by her loving family. She was born September 8, 1942 in Geneva, the daughter of Earl and Dolores (Gorgas) Carraher. She married Ronnie V. Gersin on February 4, 1967 in Geneva.

Mary Kay was always a big supporter in the Geneva Community. She was often the first to volunteer, chair a committee, plan a parade, or just to be there for anyone in need. You might say that she was a parade fanatic, but really she just loved her community and loved to bring enjoyment to them and did so by helping to organize close to 75 parades for Geneva over the years, which included 50 Grape Jamboree parades, the town’s Centennial parade, and a variety of winter and other holiday parades. Mary Kay was recognized as Geneva’s citizen of the year in 2008. She worked in various roles within the Geneva Area City Schools for decades, and also as a bookkeeper at Ferrante’s Winery.

She is survived by her daughters, DeAnne (Jodie Davies) Aussem, Erin (Joe) Toth; grandchildren, Lochlan and Kenzi Aussem, Logan and Bella Toth; sister, Betty (Bill) Peters; brother, Earl (Fran) Carraher; and many deeply loved nieces, nephews and friends. She was preceded in death by her husband, Ronnie; and her parents.

In lieu of flowers the family asks that memorial contributions in Mary Kay’s name be made to Hospice of the Western Reserve, PO Box 72101, Cleveland, Ohio 44192.

To leave a condolence, you can first sign into Facebook or fill out the below form with your name and email. [fbl_login_button redirect="https://behmfuneral.com/obituary/mary-kay-gersin/?modal=light-candle" hide_if_logged="" size="medium" type="login_with" show_face="true"]
×