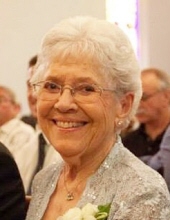 Margaret “Peggy” Louise Fenwick Deal passed away peacefully on Saturday, May 2, 2020 at Saybrook Landing in Saybrook, Ohio at the age of 94. She was born on October 18, 1925 in Rocky River, Ohio to William and Mabel Fenwick. Peggy graduated from Rocky River High School in 1943. She began her college career at Hillsdale College, transferred and earned her degree from Western Reserve University in Cleveland, where she met the first love of her life, George Deal. She graduated from Reserve in February 1948 and George and Peggy were married in Rocky River Methodist Church on August 23 of that same year.

George was a CPA who really wanted to own his own practice so, as the story has been told, they moved to Geneva during the Great Thanksgiving Snowstorm of 1950. They spent their summers jitterbugging at the Geneva-on-the-Lake dance halls and eventually built a home on Fairway Drive across the street from the Geneva-on-the-Lake golf course, where they raised their 2 children, Doug and Polly, and she lived for over 60 years.

Peggy stayed home with Doug and Polly most of the year and worked part-time as a receptionist at the CPA firm during the winter/spring busy season. She attended and cheered her children and grandchildren on in every game, match, meet, play and concert. Everyone who knew Peggy, knew her happy smile and compassionate and loving personality.

Peggy took pride in coming up with new ideas. She would tie a string on a cooked hotdog and drop it in a thermos so Doug and Polly could pull it out for their school lunch (this made them very popular at Spencer Elementary).

Peggy often swam at the Madison YMCA during the lunch hour and was very passionate about children learning to swim, especially when living near Lake Erie. After George had a pool built in the backyard, Peggy welcomed all the neighborhood kids. However, if you couldn’t swim a lap, you had to bring your mom to watch you. Nobody wanted to have to bring their mom, so everyone learned how to swim. During the summer, when the pool was often filled with kids, Peggy joked that her name became, “Mrs. Deal Looky” as everyone wanted her to see their new aquatic skill.

Peggy was an avid golfer, playing in the Madison Country Club and Geneva-on-the-Lake Ladies Leagues for countless years. She was also an avid gardener. She could drop a small plant in a tablespoon of dirt and it would thrive. It was a natural progression for her to take it upon herself to plant and tend to most of the annuals on the Geneva on the Lake Golf Course.

After George’s passing in the late 1990’s, she met the second love of her life, Norm Millberg. They enjoyed many rounds of golf together, as well as dinners, dancing, and winters in Florida. On Norm’s golf days, Peggy could often be found sitting on the front steps of her house waving to Norm as he passed by on the 13th hole of the course.

Peggy was also a faithful Christian. Becoming a member of Geneva United Methodist Church in 1950, she served on several committees and taught Sunday School for several years. Her faith and her church family were always very important to her.
More than anything else in the world, Peggy loved her family and friends. There was nothing in the world that was more important to her than her family, friends, and neighbors. She will be missed greatly for her smile and compassionate and loving personality, which will live on in our memories forever.

Private family graveside service will be observed with a public Memorial Service to be announced at a later date. In lieu of flowers contributions may be made in Peggy’s name to Geneva First United Methodist Church, 89 South Broadway, Geneva, OH 44041. Behm Family Funeral Home, of Geneva OH is assisting the family. Online obituary and condolences may be viewed at www.behmfuneral.com.

To leave a condolence, you can first sign into Facebook or fill out the below form with your name and email. [fbl_login_button redirect="https://behmfuneral.com/obituary/margaret-peggy-louise-deal/?modal=light-candle" hide_if_logged="" size="medium" type="login_with" show_face="true"]
×