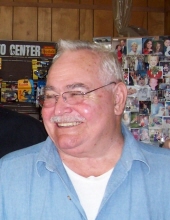 Louis “Sonny” Dolton Pettit, 80, of Austinburg, Ohio, passed away Tuesday, December 22, 2020 at Austinburg Nursing and Rehabilitation Community. He was born January 16, 1940 in England, Arkansas. He was the son of Milton Pettit and Izora (Tidmore) Pettit.

Louis served his country in the US Marine Corps and then as a police officer for several years following. He enjoyed fishing, trading with friends, and joking to make others feel better.

A Memorial Service will be announced at a later date. Final Resting Place will be Flynn Cemetery in Humnoke, Arkansas.

Behm Family Funeral Home of Madison, Ohio is assisting the family. Online obituary and condolences may be viewed at www.behmfuneral.com. Uploaded photos and memories would be greatly appreciated.

To leave a condolence, you can first sign into Facebook or fill out the below form with your name and email. [fbl_login_button redirect="https://behmfuneral.com/obituary/louis-sonny-dolton-pettit/?modal=light-candle" hide_if_logged="" size="medium" type="login_with" show_face="true"]
×