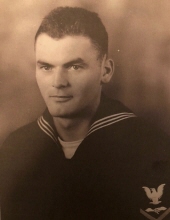 With humble acceptance of God’s will, we announce the graveside service for Ben Johnson of Perry & Willoughby Ohio.
Ben passed on Veterans Day, November 11, 2020 at the age of 97. Our service was delayed due to Covid19.
Ben worked hard for 32 years at Lubrizol Corporation, providing for his family of 4 children and his beloved wife, Sara Jane Burnett Johnson.
He was born on the Johnson farm in Perry and then lived on Kirtland Road, in Willoughby, for most of his life.
His family from all across the country, will gather together to honor his life. There will be a short ceremony outdoors, including a tribute to his service in the Navy, from 1942 to 1945.
If you knew Ben – you are welcome to come and pay your respects. He will be missed by so many who loved him dearly.
Service will begin at 11am on Saturday April 3rd, at the Perry Cemetery – Center St & Middle Ridge Rd, Perry Ohio.

The world lost a beautiful man on Veterans Day, November 11, 2020.
On December 29, 1922, Louis Benjamin Johnson was born at home in Perry, Ohio. Ben was one of 10 kids born at the house on MiddleRidge Rd.
Ben is survived by his loving wife of 73 years, Sara (Burnett).
Son, Mark of Willoughby. Daughter, Sara (Jimmy Bissig) of the Woodlands, Texas. Daughter-in-Law, Kathleen (McNiece) of Perry, Ohio.
Siblings Neva Sims, Jessie Sabo, and Charlie Johnson.
9 grandchildren and 14 great grandchildren, including Benjamin Jr. who is due in February of 2021.
Ben is preceded in death by his parents Mark and Floy, sons Jeff and Al, grandson Zak, and daughters-in-law Debra (Mark) and Kathy (Jeff), siblings Victor, Lois, Dale, Vaughn (Dutch), Vera (Bunny), and Avelda (Dolly).

Ben served in the Navy during World War 2. He spent time in the South Pacific and California.
While still serving in the navy, Ben attended Oberlin College and later Otterbein where he received a Bachelor of Science degree in PreMed. Immediately after graduation, where Orville Wright also received an honorary degree at the same ceremony, Ben married his love, Sara Burnett in 1947.
Ben worked a few jobs in Ohio and started their family with Mark Benjamin and then Jeffrey Allen.
The family moved to Virginia where they had John Alfred (Al), and then returned to Ohio where Ben worked his career as a chemical engineer for Lubrizol Corporation, retiring in 1988.
It was upon their return to Ohio that they completed their family with a baby girl, Sarajane, and bought a brick house at 4183 Kirtland Rd. This was their home until 2012.

Benjamin had horses at the Andrews School Horse Barn and attended horse shows on weekends enjoying time spent with his children.
After retirement, Ben worked at Quail Hollow for 20 years as a golf ranger where he enjoyed sports and nature – two of his treasures.
Ben enjoyed playing baseball, golf and billiards. He lettered in basketball and served as the captain of two championship teams and had a killer hook shot. Benjamin also played on the undefeated Ohio Conference football team. He loved to ride his bike, pitch horseshoes, and go for walks to enjoy nature- always holding hands with his beloved Sara.
He was an avid sports fan and loyal to the Browns, Cavs, and Indians.
This holiday season we will miss Benjamin’s gourmet Christmas breakfast and famous fudge.
Louis Benjamin Johnson will be buried at Perry Cemetery. A memorial to honor and celebrate his life will be held at a later date.
Ben loved and followed the Lord fiercely. He was the most devoted husband, father, athlete, veteran, grandfather, and disciple.

To leave a condolence, you can first sign into Facebook or fill out the below form with your name and email. [fbl_login_button redirect="https://behmfuneral.com/obituary/louis-benjamin-johnson/?modal=light-candle" hide_if_logged="" size="medium" type="login_with" show_face="true"]
×