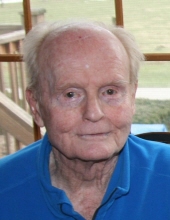 Kenneth William Johnson, age 90, passed away on Sunday, February 7, 2021, surrounded by family. He was born March 7, 1930, in Chicago, Illinois, to Swedish immigrants. He graduated from Muskogee High School as a basketball star, then went on to receive his civil engineering degree from Oklahoma A&M, now Oklahoma State. After working his way across the ocean on a freighter to visit family in Sweden, he joined the U.S. Army and was assigned to SCARWAF (Special Category Army Reassigned with Air Force) in France, then Germany, where he met his wife. After the service he joined Peter Kiewit & Sons as a civil engineer, working in the marine division on such projects as the Saint Lawrence Seaway, the St. Lucie Power Plant, the Ashtabula Harbor Project and the Cleveland break wall.

After retirement he moved to Wisconsin to fulfill his dream of having a small farm. In 1997, he and his wife moved to Perry, Ohio to be near family. During his life he served the Lutheran Church as an Elder, Trustee, and Usher; he loved traveling through the United States and Europe visiting family. He was a lifelong Packers fan and he loved to sing.

He is survived by his wife of 64 years, Emma (Seifried); his 6 children, Ingrid (Frank) Petrus, Suzanne (Mark) DuBois, Caroline Bower, Kenneth (Kristi) Johnson, Erik Johnson, and Christopher Johnson; and numerous grandchildren and great-grandchildren, all who loved him.

To leave a condolence, you can first sign into Facebook or fill out the below form with your name and email. [fbl_login_button redirect="https://behmfuneral.com/obituary/kenneth-william-johnson/?modal=light-candle" hide_if_logged="" size="medium" type="login_with" show_face="true"]
×