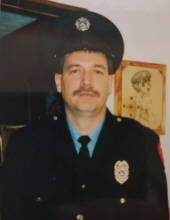 Kendall Monroe Wilson, Jr. passed away at his home Saturday, April 24, 2021. He was born May 6, 1961 in Clarksburg, West Virginia. As a child, he loved fishing, working on things, and got excited about everything. Even back then, Ken was known for his height, and earned himself the nickname of “Stretch”.

Ken started his love of firefighting as a boy of just 14 years old, in West Virginia, and it only grew from there. Once he moved to Ohio, he continued to do it on a volunteer basis while working at R.W. Sidley’s. Furthering his education and career, Ken attended Tri-C for his Paramedic Certification, in 1997. In 1998, Ken became one of Madison’s first full time firefighters. One of the highlights of his career was being able to deliver 2 babies! Ken truly loved serving his community and was extremely passionate about his job.

In his spare time, Ken enjoyed riding his Harley, fishing, walking in the Lake Metroparks with his wife, Sheila, of 30 years, and especially spending time with his grandsons. He was a devoted son to his parents. His love of firetrucks and fire equipment is something he will forever be remembered for, as well as his buying and selling of “junk”.

Family and friends are asked to pay their respects Friday, April 30, from 4-5, with a memorial service and meal immediately following at Crossroads Community Church, located at 6685 Middle Ridge Rd Madison, Ohio. In lieu of flowers, donations may be made to the family to help defray funeral costs.

To leave a condolence, you can first sign into Facebook or fill out the below form with your name and email. [fbl_login_button redirect="https://behmfuneral.com/obituary/kendall-monroe-wilson-jr/?modal=light-candle" hide_if_logged="" size="medium" type="login_with" show_face="true"]
×