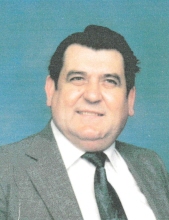 Jozsef Koleszar, age 81, of Madison, passed away Sunday, December 1, 2019, at The Lantern in Madison. He was born August 5, 1938, in Verpelét, Hungary, to Jozsef Koleszar and Rozalia (Oroszi) Koleszar. He married Lorlyn Emily Schulz on December 6, 1958.
Jozsef attended public schools in Hungary for his preliminary education. At 17 years of age in 1956, he participated in the Hungarian Revolution. Due to the changes in his homeland and his desire for opportunity and freedom, at age 18 he immigrated to America and settled in Conneaut commencing his career in die casting. Jozsef met his wife in Ashtabula while working at Molded Fiberglass. As a young family man he furthered his education as a mechanical draftsman at Cleveland Engineering Institute. He was employed in his vocation until his retirement in June of 2000.

Jozsef and his wife were blessed with four children whom they raised in their multicultural home filled with aromatic Hungarian and German cooking, dancing, and gardening. He became a proud American citizen in his new homeland.
He was honored with The Good Samaritan Award for his selfless act of saving a handicapped neighbor by racing through an apartment fire and returning the individual to safety. After retirement, Jozsef and Lorlyn returned to Hungary for 5 years reacquainting with friends and family. He and his beloved wife filled their adventurous spirits by traveling extensively throughout Europe and returned stateside in 2005. Upon their return, they continued their travels while relishing in all the family gatherings.

Jozsef lived his American dream while instilling values and Hungarian traditions in his home. He will be dearly missed by all those who knew and loved him.
He is survived by Helen (John) Manne, Steven Koleszar, Diann Ball, and Kenneth (Dawn) Koleszar; grandchildren, Eric, Julia, Nicci, Valerie, Christian, Ellen, Kaylee, Carly, Tyler, Chloe, and Savannah; great-grandchildren, Lilyana, David, Jaszmin, Elijah, Leo, and Delaney. He was preceded in death by his beloved wife, parents, sisters, Rozalia Dobler, Ilona Kopcsik, and son-law, Anthony Mariotti.

Friends and family will be received 9:30 am to 11 am, Friday, December 6th, 2019 at the Behm Family Funeral Home, 26 River St., Madison, OH with a Funeral Service immediately following at 11 am. Final Resting Place will be Greenlawn Memory Gardens in North Kingsville, OH. Online obituary and guest book at www.behmfuneral.com.

To leave a condolence, you can first sign into Facebook or fill out the below form with your name and email. [fbl_login_button redirect="https://behmfuneral.com/obituary/jozsef-koleszar/?modal=light-candle" hide_if_logged="" size="medium" type="login_with" show_face="true"]
×