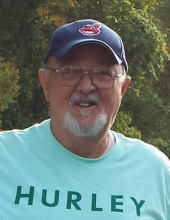 Jack was a devout Christian and a “talker” who never met a stranger he didn’t like. He was an avid Browns and Indians Fan and also spent nearly every Saturday at Painesville Speedway for many years. He enjoyed going to reunions and picnics and eating out as well as camping with family, riding his motorcycle, cooking and feeding the birds. He was a member of the Fraternal Order of Eagles and also was a member of Chardon Assembly of God Church. He also enjoyed the Wonderful Willoughby site on Facebook.

We miss you Already!

He was preceded in death by parents, Jack & Rita Hurley and brother-in-law, Jerry Metzger.

Services to be held at a later date because of COVID 19. Final resting place will be at All Souls Cemetery, Chardon OH. The Behm Family Funeral Home of Madison, OH is assisting the family at this time. Online obituary and condolences may be viewed at www.behmfuneral.com.

To leave a condolence, you can first sign into Facebook or fill out the below form with your name and email. [fbl_login_button redirect="https://behmfuneral.com/obituary/john-jack-p-hurley/?modal=light-candle" hide_if_logged="" size="medium" type="login_with" show_face="true"]
×