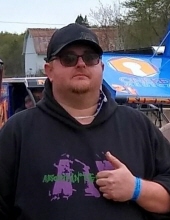 A man with many talents, Jeffrey was an amazing cook and attended Pittsburgh Culinary Institute. He had worked for Conrad Tires as a Master Technician and more recently at Central Hardware. Jeffrey was active in the wrestling community and enjoyed many friends with AIW Absolute Intense Wrestling. He was also well known in the Dirt Truck Racing Community. A talented photographer, many of his works may be viewed at https://www.facebook.com/jeffkalbjrphotography/.

In lieu of flowers, donations may be sent, in Jeffrey’s name, to AIW c/o John Thorne, 5857 Bucyrus Dr. Cleveland, OH 44144.
Online obituary and condolences may be viewed at www.behmfuneral.com

To leave a condolence, you can first sign into Facebook or fill out the below form with your name and email. [fbl_login_button redirect="https://behmfuneral.com/obituary/jeffrey-kalb-jr/?modal=light-candle" hide_if_logged="" size="medium" type="login_with" show_face="true"]
×