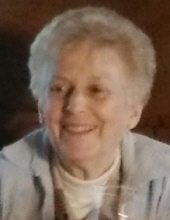 Janet Kay Reimholz-Babich, age 81, of Fairport Harbor, passed away Sunday, November 22, 2020 at the Lantern of Madison. She was born September 1st, 1939 in Conneaut, Ohio to Walter and Kathryn (King) Calkins.

Kay graduated from Rowe High School in Conneaut. She was a longtime head cashier at Mentor Lumber & Supply prior to her retirement in 1994 where she was affectionately known as “Ma Kay”. Also, a Member of the First Congregational Church in Painesville, Kay sincerely enjoyed volunteering and especially organizing programs to benefit children.

Kay was an honorary member of the Telephone Pioneers of America, a member of the Red Hat Society and blessed with friends from coast to coast. She lived life as an example and was well known for being first, a Lady. Her Irish heritage was celebrated and she conceded that it often offered strengths that others admired.

Kay is survived by her daughter, Lori K. (Reimholz) Wachs; son, Frank T. Reimholz; and many nieces and nephews with many grandniece and grandnephews. She was preceded in death by her parents, Walt (Bub) & Kathryn Calkins and her sisters, Joyce Rickard and Eileen Wrieth.

A Celebration of Life will be planned for a later date to protect the health of others and the remaining family. A gathering will be announced when circumstances are appropriate to do so and in lieu of flowers, the family requests your support of St. Jude Children’s Hospital, one of Kay’s most passionate interests.

The Behm Family Funeral home of Madison is assisting the family. Online obituary and condolences may be viewed at www.behmfuneral.com

To leave a condolence, you can first sign into Facebook or fill out the below form with your name and email. [fbl_login_button redirect="https://behmfuneral.com/obituary/janet-kay-reimholz-babich/?modal=light-candle" hide_if_logged="" size="medium" type="login_with" show_face="true"]
×