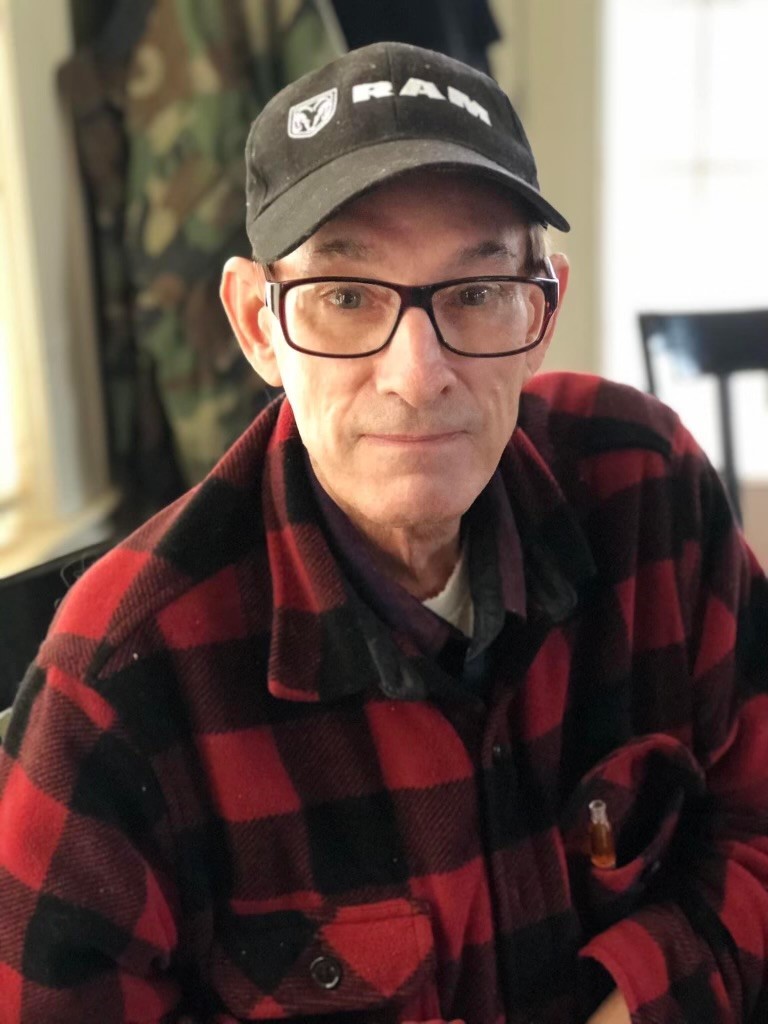 Harold Adam Scheve Jr. of Madison, 66, passed December 15, 2021 wrapped in the arms of his children. Born on June 4, 1955 to Harold Sr and Luella (Rogers) Scheve in Chardon, Ohio. He was raised in Madison and was a 1973 graduate of Madison High School.

He entered the Air Force in 1973 right out of high school and went to Wright Patterson Air-Force base. His Military career took him to Bergstrom, Nellis and other AFB’s. He proudly served overseas in Desert Storm. He married Barbara in ‘74 and raised his first 4 children. He had a disability retirement in 1994, he returned to Madison and was a kidney transplant recipient in 1996. He married Tracee in 1995 and raised 3 more children.

Harold enjoyed, ….Fishing, Football, Miniature golf, his collectible cars, and car shows. He was active numismatist belonging to several area coin clubs. He collected guns, cards, comic books and just about anything odd. He loved gardening in his childhood home that he’d bought back in 2008 and tending his father’s roses.

While he had a lot of medical issues later in life, he never let that impede him in having a good time or going out with family and friends. Air shows, The Great Geauga County Fair, area Coin, VW Car shows, catching up at area bars and restaurants, he loved spending time with food and cheer.

The greatest Joys in life were his seven children. From becoming a dad in 1973 when he met Chari, then each and every one thru 1998 when God blessed him with his twins, Gabe and Victoria, there was never anything, anything, that he wouldn’t do for his kids. Getting them raised right, and being there for their individual life needs. He was selfless in his love for them and helping to guide them. In his last days he said “I’ve done my job,..I did the best I could, my work is done. ~you’ll all be OK.”

With that our family is so proud that he is survived by: Cassandra {Chari} Stacey, Terri Lynn (Tim) Gough of Mentor Oh, Daniel (Heather) of Ft Worth Tx, Elijah Shackelford of Apex NC, and Gabriel Scheve of Spencer NC and Victoria Scheve (Rudy Palacios) of Albemarle NC.

Harold is preceded in death by his beautiful daughter Jennifer  M Hunger in 2009, his parents Harold and Luella Sr., and grandson Jeffrey James 1990.

Calling hours will be 6-8pm Tuesday 12/21 and Funeral Service at 11am Wednesday 12/22 at Behm Funeral Home Madison. Burial will be in Perry Cemetery. Donations can be to St Jude Children’s Hospital, SubZero Mission or your favorite charity in his Honor.

To leave a condolence, you can first sign into Facebook or fill out the below form with your name and email. [fbl_login_button redirect="https://behmfuneral.com/obituary/harold-adam-scheve-jr/?modal=light-candle" hide_if_logged="" size="medium" type="login_with" show_face="true"]
×