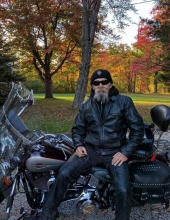 Gary attended Wickliffe High School. He served in the U.S. Marine Corp. during the Vietnam Era. He drove tractor trailer for many years and worked as an owner operator at Truckmen Corp. Gary was an avid outdoorsman who enjoyed hunting and fishing.

He is survived by his wife of 41 years, Judy Nadvornik; daughter, Adrienne L. Nadvornik; sons, Shannon M. and Daniel E.A. Nadvornik; grandchildren, Ashley Nadvornik and Austin Daugherty; mother Dorothy Nadvornik; brothers, Joe and David and sister, Linda Masten. He is also survived by several aunts, uncles, nieces, nephews and cousins. He was preceded in death by his father.

Family will receive friends Saturday, July 20, 2019 from 4 to 6 p.m. at Behm Family Funeral Home, 26 River St. Madison. A military service to honor Gary will immediately follow visitation at 6:00 pm in the funeral home. Memorial contributions may be made to American Cancer Society, 10501 Euclid Ave. Cleveland, OH 44106-2204.

To leave a condolence, you can first sign into Facebook or fill out the below form with your name and email. [fbl_login_button redirect="https://behmfuneral.com/obituary/gary-stephen-nadvornik/?modal=light-candle" hide_if_logged="" size="medium" type="login_with" show_face="true"]
×