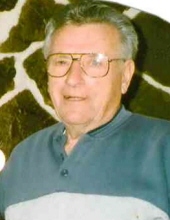 A 1949 graduate of Platt R. Spencer in Geneva, Frank lettered in Baseball, Basketball and Track. After school he joined the United States Army and served 2 years during the Korean War and 6 years in the active reserves. He worked as a heavy equipment operator and was a member of Operator and Engineers Union Local 18.

He is survived by his children, Frank A. Cajhen, Mary J. (Kenny) Schiemann; grandchildren, Alyssa (Eric) Cornell, Erica Schiemann. He was preceded in death by his wife of 61 years, Margaret; his brother Andy Cashen.

The family will receive friends from 4-7 PM Tuesday May 25, 2021 at Behm Family Funeral Home at 26 River Street in Madison. A private burial will take place at North Madison Cemetery. Online obituary and condolences may be viewed at www.behmfuneral.com

To leave a condolence, you can first sign into Facebook or fill out the below form with your name and email. [fbl_login_button redirect="https://behmfuneral.com/obituary/frank-cajhen/?modal=light-candle" hide_if_logged="" size="medium" type="login_with" show_face="true"]
×