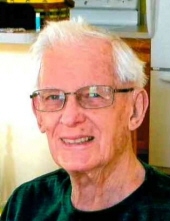 Elton T. Leppelmeier, age 94, of Perry, OH passed away Sunday, January 3, 2021 at Tri Point Medical Center. He was born August 26, 1926 in Cleveland to Theodore and Meta (Gotsch) Leppelmeier. He lived in Highland Heights for over 50 years and the last 10 years in Perry Township.

He served in The Asiatic Pacific Theater at General McArthur Headquarters in the Philippines from 1944 to 1946. Elton worked at General Electric Nela Park from 1947 until 1983 in sales and engineering for the lamp division. He also served as VP of Engineering at National Biological Corporation from 1983 to 1995. Elton has been awarded numerous patents in the lighting industry.

He enjoyed many hobbies including model railroading, model ship building, stamp collecting reading fiction and world history; watching movies and listening to all genre’s of music. He was an active member of the Mayfield Township Historical Society for many years and was also an avid Tribe, Browns and Ohio State fan.

He is survived by daughters, Kathy (David) Warne and Sandy Leppelmeier; 3 grandchildren and 3 great-grandchildren. He was preceded in death by his wife Joan of 57 years; daughter, Debra Leppelmeier; and his parents.

Private Family Services will be observed. Contributions may be made in Elton’s name to Painesville Railroad Museum, 475 Railroad Street, Painesville, OH 44077 or The Friends of Perry Public Library, 3753 Main Street, Perry, OH 44081.

Behm Family Funeral Home of Madison, OH is assisting the family. Online obituary and condolences may be viewed at www.behmfuneral.com

To leave a condolence, you can first sign into Facebook or fill out the below form with your name and email. [fbl_login_button redirect="https://behmfuneral.com/obituary/elton-t-leppelmeier/?modal=light-candle" hide_if_logged="" size="medium" type="login_with" show_face="true"]
×