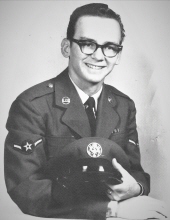 Earsel M. Thompson, age 79 passed away at home surrounded by family. Earsel was born in Bartow, West Virginia in 1941 to Marvin and Marjorie (Simmons) Thompson.

He was a graduate of Riverside High School and served in the United States Air Force from January 1961 to January 1967. He completed basic training at Lackland Airforce Base in San Antonia Texas and completed Tech School at Shepherd Air Force Base in Wichita Falls Texas. Earsel earned a medal of conduct while serving in the USAF as a welding and heating specialist.

Earsel married June Rockhill on July 22, 1963 in Painesville, Ohio. He retired from CEI in 1994. Earsel continued to work after his retirement at RT and T in Mentor until last year.

Earsel loved spending time with his family and pets. He enjoyed going to his grandchildren and great-grandchildren’s sporting events and activities. He served as the president of the Geneva Athletic Boosters from 1986 to 1987. He enjoyed gardening and taught many generations of children to love it as well. He enjoyed fishing and spending time outside. Earsel was a huge dirt track enthusiast. He spent many years traveling with his son and friends to multiple tracks in many states. Earsel also volunteered at the VFW post 6846 in Geneva. He machined the rifle to complete the Soldiers and Sailors monument in town. Earsel will be greatly missed by his family.

Burial will take place at 11 am on Friday, August 21, 2020 at Maplewood Cemetery, Maple Avenue in Geneva. Online obituary and condolences may be viewed at www.behmfuneral.com

To leave a condolence, you can first sign into Facebook or fill out the below form with your name and email. [fbl_login_button redirect="https://behmfuneral.com/obituary/earsel-m-thompson/?modal=light-candle" hide_if_logged="" size="medium" type="login_with" show_face="true"]
×