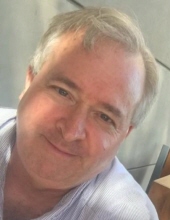 Doug worked for 15 years as the inventory manager at the Greater Cleveland Food Bank. Previously he worked for Sears Roebuck, Sears Hardware, Snap-On Tools and Lowe’s. Doug was passionate about the Great Lakes & the Upper Peninsula of Michigan. He enjoyed hiking the Lake MetroParks, Christmas, a neat bourbon & a good cigar!

Doug was very dedicated to the people in his life whether it was his work for the Food Bank in Cleveland, volunteering in Houston after Hurricane Harvey or an encouraging text to nieces and nephews on the first day of school. Doug was a man of few words with a gruff exterior but a gentle soul and a big heart who will be missed always.

Due to the increase in Covid cases and the upcoming flu season, a memorial service will be held at a later date. Arrangements are being handled by Behm Funeral Home, Madison, Ohio. In lieu of flowers, donations may be made in Doug’s name to the Greater Cleveland Food Bank, 15500 S. Waterloo Rd, Cleveland 44110 or www.greaterclevelandfoodbank.org; or Lake MetroParks, 11211 Spear Rd, Painesville 44077.

The Behm Family Funeral Home of Madison is assisting the family at this time. Online obituary and condolences may be viewed at www.behmfuneral.com

To leave a condolence, you can first sign into Facebook or fill out the below form with your name and email. [fbl_login_button redirect="https://behmfuneral.com/obituary/douglas-b-freeman/?obId=22339601?modal=light-candle" hide_if_logged="" size="medium" type="login_with" show_face="true"]
×