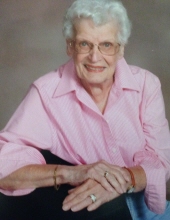 Donna Elaine Pohl passed away at her winter home in Scottsdale, AZ on January 8, 2020 at the age of 87. She was born in Erie, on January 13, 1932, the daughter of the late James and Alma Culver Doran. Besides her parents, she was preceded in death by her sisters, Ruth Truitt, Carol Hill, and Dorothy Geisler.
Donna is predeceased by her husband of 58 years, Richard P. Pohl.
She is survived by two sisters, Patricia Harabedian and Dayle Cianella, and many nieces and
nephews.
Donna is lovingly remembered by her children, Richard (James Bubik) Pohl, Dorothy (James)
Garner, Douglas (Natalie) Pohl, and Dawn (Raymond) Perez. She had a special place in her
heart for her four grandchildren, Nolan (and wife, Ashley), Cory, Haley, and Camren.
Donna began working at a candy counter in a local movie theater in Erie, Pennsylvania while
still in high school. Once she graduated, she spent about 6 months employed with the Salvation Army. Donna then was hired by the Erie Dispatch, a local newspaper, to write for the Society Department focusing on the “post-teen” female readers. She remained with the paper at various positions through her wedding and 2 pregnancies (Richard and Dorothy).
Donna worked with her husband, Richard, at The Geneva Rubber Company in Geneva, Ohio,
ten years after the family moved to Ohio in 1956. She was Executive Secretary to the company president, Cecil Draper. She retired after approximately 20 years with the company. Up until she passed, she continued to meet with her Rubber Company friends for a monthly breakfast at a local restaurant.
Two engraved golf clubs have been included on the “Pohl” headstone since Donna and her
husband, Richard, loved being out on the golf course with family and friends. Once they both
retired, Donna and Richard spent much of their time traveling between Ohio and Arizona visiting family, friends, and, of course, playing golf.
A memorial service will be held at 11 am. Tuesday, June 30, 2020, at Fairview Memorial Park
(Cemetery) in Madison, Ohio. Fairview Cemetery is located 0.4 mile south of the Village Park
and 0.4 mile north of Interstate 90, on the east side of River Street (S.R 528). Pastor Rick will
officiate. It was Donna’s wish that in lieu of flowers, a donation be made to the Central
Congregational Church’s organ fund. Also, the family encourages you to remember your local
hospice with a donation in Donna’s name. The Hospice of the Valley in Phoenix took wonderful
care of Donna in her last days.
The Behm Family Funeral home of Madison, OH is assisting the family. Online obituary and condolences may be viewed at www.behmfuneral.com

To leave a condolence, you can first sign into Facebook or fill out the below form with your name and email. [fbl_login_button redirect="https://behmfuneral.com/obituary/donna-elaine-pohl/?modal=light-candle" hide_if_logged="" size="medium" type="login_with" show_face="true"]
×