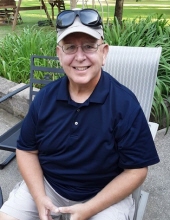 Dennis P. Noble (64) of Geneva, passed away on Thursday, June 10, 2021. Born
July 1, 1956 in Geneva, Ohio. He was the son of James Noble and Phyllis (Proctor)
Foster. He was a 1974 graduate of Baldwin High School in Pittsburgh and actually
caught for Joe Montana once in a baseball game. He went on to graduate from Clarion
State College in 1978 where he was a sports writer for the school newspaper. He
earned his Master Degree in Education from Kent State University (1993). He married the love of his life Jane Hyde on May 19, 1984, after meeting when working retail together at the East Liverpool, OH Kmart, going on to share many wonderful years and memories.
Denny was a well-respected teacher at Geneva Middle School for over 25 years where
he served as Director of Fellowship of Christian Athletes, an organization that
allowed him to have a positive impact on the lives of students for many years. He loved
his trips to Jamaica and traveling to New York with family members Sandy and Larry. His greatest love was his family. Denny cherished the many backyard Home Run Derby’s and football games with his sons Kenley and Aaron, and later with his grandchildren. Denny and Jane faithfully attended Peoples Church over the years.

Friends and family will be received 1 – 3pm and 6 – 8pm, Monday, June 14, 2021 at the Behm Family Funeral Home, 175 South Broadway in Geneva. Funeral Service will be held 11am, Tuesday, June 15, in the Auditorium at Geneva High School, 1301 South Ridge Road East in Geneva.
Burial will take place at Evergreen Cemetery in Geneva.

The family suggests contributions be made to Geneva Area City Schools for a Scholarship Fund being created in Denny’s name.
Online obituary and condolences may be viewed at www.behmfuneral.com

To leave a condolence, you can first sign into Facebook or fill out the below form with your name and email. [fbl_login_button redirect="https://behmfuneral.com/obituary/dennis-p-noble/?modal=light-candle" hide_if_logged="" size="medium" type="login_with" show_face="true"]
×