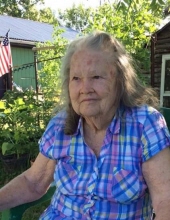 Della Pauline Brown, age 91 passed away December 29, 2019 surrounded by her family. She was born February 6, 1928 in Sumner, KY to Henry and Rachel (Davis) Sulfridge.

Della was a loving wife and mother who loved her family. She was also a lover of animals, both wild and domesticated. She enjoyed canning the produce that she raised in her garden and also spent many hours sewing and quilting.

Friends will be received 4-6 p.m. Saturday, January 4, 2020 at the Behm Family Funeral Home, 26 River Street, Madison, OH 44057 with a service immediately following at 6 p.m. at the funeral home. Final resting place will be at Ohio Western Reserve National Cemetery on Monday, January 6, 2020.

To leave a condolence, you can first sign into Facebook or fill out the below form with your name and email. [fbl_login_button redirect="https://behmfuneral.com/obituary/della-pauline-brown/?modal=light-candle" hide_if_logged="" size="medium" type="login_with" show_face="true"]
×