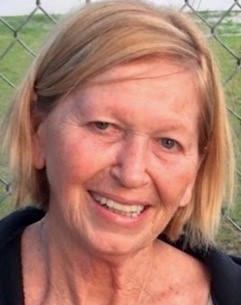 Deborah J. Gerbasi, age 69, passed away on April 3rd, 2022. She was born February 6th, 1953 in Maple Heights, Ohio to Robert and Treva (Bacher) Finan. Those who knew her could easily identify her as either, Debbie, Nana, or Aunt Deb.

She was a generous woman who would not hesitate to give anything to help a person in need, including random strangers. She conversed with anyone & connected to so many! She believed in the “more the merrier” philosophy. Her creativity and numerous talents included crocheting, painting, ceramics & bowling. She was an avid Cleveland Browns & Ohio State football fan. It seemed Lifetime or Hallmark Movie Channels would be looping her TV at all times. No one went hungry in her house and her culinary skills will surely be missed, including Lady Locks and the infamous Rainbow Jello served at so many functions. She was a self-made entrepreneur servicing as a seamstress, housekeeper, embroiderer & caterer.

She was a stubborn, strong-willed woman who was often politically charged. She enjoyed music, especially live music & nights dancing along with her girlfriends at local wineries. She was habitually late & always forgiven for it.

It went without doubt her heart was overflowing with the pride & love for her family, she was a Nana unlike any other! Fortunately, her grandchildren all carry a bit of “Nana’s mischievousness” in them which she truly relished.

Friends will be received 4-8 pm, Friday, April 8, 2022 at Behm Family Funeral Home, 26 River Street in Madison. Service will be 11 am Saturday, April 9, 2022 with 1 hour of visitation prior to the service beginning at 10 am. In lieu of flowers, the family is asking for donations in her honor to the Thompson Fire Department, Attn: Battles, PO 204, Thompson, Ohio 44086. Online obituary and condolences may be viewed at www.behmfuneral.com

To leave a condolence, you can first sign into Facebook or fill out the below form with your name and email. [fbl_login_button redirect="https://behmfuneral.com/obituary/deborah-j-gerbasi/?modal=light-candle" hide_if_logged="" size="medium" type="login_with" show_face="true"]
×