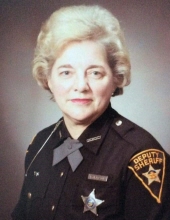 Carolyn L. Claypool Phelps, age 88, of Geneva, passed away Tuesday, March 2, 2021 at home surrounded by her family. She was born September 3, 1932 in New York, the daughter of Dorothy (Martin) and Milo Walter.

A 1950 graduate of Geneva High School, Carolyn worked as an operator for the Western Reserve Telephone company, a dispatcher for the Geneva Police Department, and a Deputy Sheriff with Ashtabula County for 30 years. She was also secretary and Past Matron of the Eastern Star as well as a member of Rock Creek United Methodist Church.

She was preceded in death by her first husband, Sheldon “Bo” Claypool, whom she was married to for 65 years; her parents; and daughters-in-law, Nancy and Jan.

A private family graveside will be held with a celebration of Carolyn’s Life to be announced at a later date.

To leave a condolence, you can first sign into Facebook or fill out the below form with your name and email. [fbl_login_button redirect="https://behmfuneral.com/obituary/carolyn-l-claypool-phelps/?modal=light-candle" hide_if_logged="" size="medium" type="login_with" show_face="true"]
×