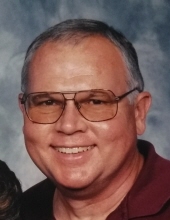 Bud C. Wolfe, Jr. age 65, of Madison, passed away Thursday, April 11, 2019 at Cleveland Clinic Hillcrest Hospital. He was born August 20, 1953 in Painesville. He married Charmin L. Burns in Thompson on June 23, 1973. Bud was a 1971 graduate of Ledgemont High School and earned an Associate’s degree in Criminal Justice from Lakeland Community College and a Bachelor of Science from Lake Erie College. Bud worked as a dispatcher for Madison Township Police and was Head of security for Lake County Memorial Hospital, Lake Erie College and Ursuline College. After retirement, he obtained his insurance license and worked for Progressive Insurance as well as State Farm. In his spare time, he enjoyed o-scale model trains and was an avid Cleveland Indians and Cleveland Browns fan.

He was preceded in death by his mother, Carol (Ede) Geis and infant brother, Christopher and his in-laws, Blaine and Janet Burns.

To leave a condolence, you can first sign into Facebook or fill out the below form with your name and email. [fbl_login_button redirect="https://behmfuneral.com/obituary/bud-c-wolfe-jr/?modal=light-candle" hide_if_logged="" size="medium" type="login_with" show_face="true"]
×