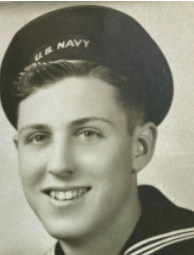 Arthur J. Zentgraf, Sr., age 96, a long-time resident of Perry and recently of Mentor, passed away Tuesday, November 30, 2021 at The Enclave of Newell Creek, surrounded by his loving family. He was born April 29, 1925 in Newburgh Heights, Ohio to Minnie C. (Knaack) and Arthur C. Zentgraf. He married Mercedes Elizabeth “Mickey” Konrad in Parma, on October 26, 1968 at Holy Trinity Lutheran Church.

Arthur served his country in WWII aboard the USS LST-908 in 1943-1946 in the Pacific as a Signalman Rank of 2nd Class Petty Officer with 6 major Invasions. He graduated as an Accounting Major from Fenn College (presently Cleveland State). He retired in 1993 as Vice President of Finance of Linderme Tube Co.

He was a member of Cornerstone Friends Church in Madison since 2000 and previously of Holy Cross Lutheran Church in Madison from 1979-2000, and Holy Trinity Lutheran Church in Parma from 1968-1979. He served in many different aspects while attending these churches, including serving on the Design Team and Usher/Greeter Team at Cornerstone and sang in choirs of several of them. At Holy Cross Church, he served as President, Vice President, Treasurer, and Financial Secretary as well as an Elder and on other boards.

Friends will be received 4:00-7:00 PM, Friday, December 10, 2021 at the Behm Family Funeral Home, 26 River St., Madison. A Funeral Service will be held at 11:00 AM, Saturday, December 11, 2021 at Cornerstone Friends Church, 2300 Hubbard Rd., Madison, Ohio. Military Honors will be observed during the Graveside Service at Perry Cemetery.

To leave a condolence, you can first sign into Facebook or fill out the below form with your name and email. [fbl_login_button redirect="https://behmfuneral.com/obituary/arthur-zentgraf-sr/?modal=light-candle" hide_if_logged="" size="medium" type="login_with" show_face="true"]
×