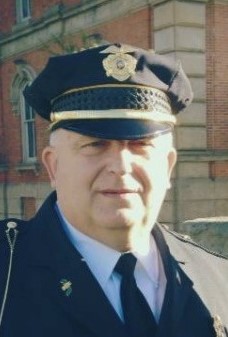 Arnold enlisted into The United States Marine Corps and volunteered for deployment to the Republic of Vietnam as a Combat Engineer, upon return from military service, Arnold pursued and accomplished his passion as a law enforcement professional until his retirement after 38 years, serving the last 17 years as a Chief of Police. Arnold started his law enforcement career with Lake County Narcotics Agency, as an undercover narcotic’s agent.

As Chief of Police, Arnold participated in the strategic planning of three sitting presidential appearances. He pursued full-scale hands-on interagency training with first responders from Lake, Cuyahoga and Geauga Counties. Arnold was also a founding board member of the Northeastern Ohio Amber Alert.

Since 2014, Arnold was employed as an agent for Pinkerton Consulting and Investigations Inc. He had been entrusted as a Lead Agent with providing protection to five presidential campaign rallies, for President Donald J. Trump, the Republican National Convention, major news network’s high-profile reporters, executives and dignitaries, large international political organizations and large national and international corporations.

To leave a condolence, you can first sign into Facebook or fill out the below form with your name and email. [fbl_login_button redirect="https://behmfuneral.com/obituary/arnold-edward-stanko/?modal=light-candle" hide_if_logged="" size="medium" type="login_with" show_face="true"]
×