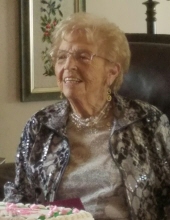 Anita Ford Gabor passed away on June 10, 2020 at Lantern of Madison. A lifelong resident of Lake County, Anita was born to Libbie and Reuben Ford on April 26, 1920 in Painesville, OH. She married Edward Gabor on August 21, 1936, resided in Mentor, Painesville and Perry before moving to the Gabor Family farm in 1955 where she was involved with the day to day working of the family farm. She and her husband also lived in Kingston, Jamaica from 1977 to 1985 while Edward was plant manager for I.S. Joseph Co.

Anita attended Madison High School and worked and volunteered in many different venues. She was employed by the Industrial Rayon plant in Painesville, Madison Local Schools as a cafeteria and kindergarten aid and floating secretary and as a reporter and photographer for the Madison and Geneva Free Press. An avid photographer, Anita was the unofficial photographer at most social and civic events and loved to share her photographs. She was active in the Madison Garden Club, served as President of the BPOE Painesville Emblem Club, and President of the Madison Historical Society for many years. She also served as a Madison Library and N.E.O. (Northeast Ohio) Hospital volunteer, was active in the Farm Bureau Association and the Girl and Boy Scout organizations. Anita and Eddie were also involved in the petition to build the Route 528 Bridge in Madison. Recently, Anita was honored as a member of First Ohio Families by the Lake County Genealogical Society. Anita was a member of Park Street Methodist Church where she also served in many capacities.

To leave a condolence, you can first sign into Facebook or fill out the below form with your name and email. [fbl_login_button redirect="https://behmfuneral.com/obituary/anita-mae-gabor/?modal=light-candle" hide_if_logged="" size="medium" type="login_with" show_face="true"]
×