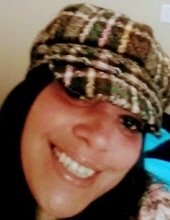 Amanda Renae Abrams, age 40, of Madison, Ohio passed away on Thursday, September 24, 2020 at Metro Health Medical Center in Cleveland. She was born on October 23, 1979 in Ashtabula, Ohio to Judith (Gran) and William Abrams.

Amanda graduated from Madison High School in 1998. She received a certificate from the American Medical & Dental Institute and had worked at Mentor Mednet as a phlebotomist. She also studied at Bryant & Stratton College. Amanda was also a phlebotomy instructor for the American Red Cross.
Amanda’s hobbies included collecting beach glass and making jewelry.
Most of all Amanda enjoyed taking care of people and had a devoted passion for animals.

Private family services are being held.

Contributions may be made to The Lake County Humane Society, 7564 Tyler Blvd. Suite E Mentor, OH 44060.

To leave a condolence, you can first sign into Facebook or fill out the below form with your name and email. [fbl_login_button redirect="https://behmfuneral.com/obituary/amanda-renae-abrams/?modal=light-candle" hide_if_logged="" size="medium" type="login_with" show_face="true"]
×