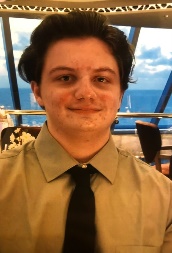 Aiden was a 10th grade student at Riverside High School. He played guard and defensive end as #77 for the Riverside football team and previously played tenor saxophone in the Riverside Regiment Marching Band. He loved watching and playing sports and talking sports with friends and family. He was a huge fan of Atlanta teams and was thrilled to see the Braves win the World Series this year. Aiden treasured his close friendships and loved playing video games and hanging out with his buddies.

He leaves behind his parents, Charles and Barbara Bailey; sister, Ava Elizabeth Bailey; grandparents, Bruce and Mary Witherspoon; aunts and uncles, William and Debra Booth, David and Christine Weber, and David and Elizabeth Main; and many cousins. He was preceded in death by his grandparents, Charles and Jeanette Bailey, and aunts, Jacqueline Patterson and Charlene Hollaway.

Friends will be received Thursday, January 6th 2022, from 5-8pm at Behm Family Funeral Home, 26 River St., Madison. A private celebration of life service will be held for his family and close friends.  Final Resting place will be at Fairview Cemetery.

To leave a condolence, you can first sign into Facebook or fill out the below form with your name and email. [fbl_login_button redirect="https://behmfuneral.com/obituary/aiden-charles-bailey/?modal=light-candle" hide_if_logged="" size="medium" type="login_with" show_face="true"]
×