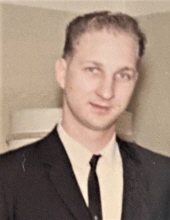 Rudolph “Bud” F. Skedel, age 81 of Mentor-on-the-Lake and previously of Broadview Heights, passed away on January 30, 2021. He was born September 26, 1939 in Cleveland, Ohio to Rudolph and Claire (née Kaniecki) Skedel. Bud wed Marie T. Gill at Sacred Heart of Mary Church in Weirton,West Virginia on May 21, 1966.

Bud actively served his country in the United States Navy for two years and served another four in the Naval Reserve. Bud attended college at Kent Sate University and went on to establish Four Seasons Heating and Cooling, Inc., proudly owning and operating his independent business for the next 38 years.

Bud was a proud husband, father and dedicated family man throughout his life. Bud served his family, his country, his community and his faith with true devotion, humility and passion. Bud was most recently an active member of Lakeshore Assembly of God and previously Cornerstone Chapel in Medina.

Celebration of Life visitation will be held June 11, 11 – 12pm, followed by a Service at 12pm at Lakeshore Assembly of God, 8880 Lakeshore Blvd. Mentor ohio 44060.
A private interment at Ohio Western Reserve National Cemetery will also be conducted at a later date.

To leave a condolence, you can first sign into Facebook or fill out the below form with your name and email. [fbl_login_button redirect="https://behmfuneral.com/obituary/rudolph-bud-f-skedel/?modal=light-candle" hide_if_logged="" size="medium" type="login_with" show_face="true"]
×